Why Buy Colorado Made Shutters 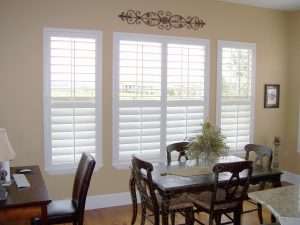 Buying shutters directly from a local manufacturer ensures that your shutters will be a long-lasting window covering in our harsh Colorado environment. Shutters manufactured in other countries are not necessarily designed to withstand Colorado’s climate.

Buying Colorado made shutters is better for the environment. When producing locally made shutters, there is not even 10% as much trash. And it takes a lot less fuel to buy locally then it  does to ship from China .

Made in China products can go through multiple hands before reaching their final destination. Even if the order does arrive on time, the possibility of damage is higher. Distance, time and language separate the customer from their custom shutters. The majority of the cost charged for foreign made plantation shutters goes to transportation, not materials and labor.

Imported shutters require fewer manufacturing regulations than American made products. American companies are required to abide by a fair wage and labor requirements, environmental restrictions, and safety restrictions that many other countries do not enforce.

Customer service is much easier when buying shutters made in Colorado. Customer service with non-American companies are ordinarily handled by an overseas call center that may not have a real idea about or interest in shutters. Sometimes there is only an online form to fill out when there is a problem.

We urge you to consider purchasing our custom Colorado made shutters.

Send us your measurements for a quick quote

Bring home the beauty of custom window coverings with a convenient on-site no pressure consultation from New View Blinds and Shutters. We will offer you low everyday honest pricing on a huge selection of shutters, shades, blinds and more. Take advantage of our decades of experience to find your perfect window coverings!